I wrote about the following case last year and I thought the defendants would probably get off with a despicable probation sentence (https://nowprophecy.wordpress.com/2018/09/20/more-victims-added-to-detroit-genital-mutilation-case/), but the situation is even worse than I thought…

United States District Judge Bernard Friedman dismissed charges against four defendants, three mothers of the girls who were mutilated and tortured, and Dr Jumana Nagarwala, who mutilated and tortured them, in the nation’s first case involving the crime of female genital mutilation (FGM) in Detroit Michigan (Islamabad, USA)!

Judge Friedman ruled it was unconstitutional for Congress to outlaw the practice under the commerce clause.

Friedman ruled that Congress had no constitutional authority to outlaw FGM, stating it has no connection to “interstate commerce.” (https://dailycaller.com/2018/11/20/dismisses-genital-mutilation/)

Friedman has one thing right; FGM doesn’t have anything to do with “interstate commerce.” Congress should have outlawed FGM because it is the MUTILATION and TORTURE of CHILDREN!

They aren’t really imbeciles; they are deceitful and conniving! Congress knew what they were doing and why they were doing it. When the law was instituted in 1996, it appears they purposefully included it with interstate commerce in order to get any such case thrown out of court when it might come up. Most members of Congress were “bought and paid for” a long time ago, and the bribes continue…just ask Nancy Pelosi and Hillary!

The prosecutors are imbeciles! How about filing criminal complaints against defendants who mutilate and torture children BECAUSE IT IS AGAINST THE LAW TO MUTILATE AND TORTURE CHILDREN?!

What can we expect from the predominantly Liberal Luciferian Lunatics in Congress and the judicial system in Sharia Michigan – Islamabad, USA?

Actually, the whole Muslim moon god-worshiping abomination is affecting the entire US.

In 2012, Philadelphia Judge Mark Martin dismissed charges against a Muslim man who attacked a guy dressed as “Zombie Muhammad” on Halloween.

Judge Martin not only threw out the case, but he railed against the victim of the assault, who was attacked and choked by the Defendant (who admitted his crime to Police Sgt Brian Curtis). Martin said to the Plaintiff:

“Having had the benefit of having spent over two and a-half years in predominantly Muslim countries, I think I know a little bit about the faith of Islam. (One has to wonder what he was doing in Muslim countries before taking the bench in the US.) In fact, I have a copy of the Quran here and I challenge you, sir, to show me where it says in the Quran that Muhammad arose and walked among the dead. I think you misinterpreted things. Before you start mocking someone else’s religion, you may want to find out a little bit more about it. It makes you look like a doofus… In many Arabic-speaking countries, something like this is definitely against the law there. (Try against the law in ALL Arabic-speaking countries.) In their society, in fact, it can be punishable by death and it frequently is in their society.” (Try it is ALWAYS punishable by death, Bubba!) (https://dailycaller.com/2012/02/24/judge-dismisses-charges-against-muslim-man-who-attacked-atheist-dressed-as-zombie-muhammad/)

Frankly, Martin, we Americans could give a hanging doodle about what your Quran says! Most of us aren’t Muslims and we believe in Freedom, not beheadings and amputations on a whim. Why don’t you just take your Quran and beat it back to those Muslim countries. Maybe they will let you sit on their capital cases!

Judge Martin, you are not presiding in an Islamic court here. In your delusional mind, perhaps you believe you are, but you are actually presiding in an American court, where we uphold the Freedoms of speech and expression, and we don’t allow people to attack others physically because they don’t like what someone else is doing, or saying, and we don’t execute people for making fun of Muhammad, dimwit!

Let’s hope the Plaintiff’s attorney filed an appeal and a judicial complaint.

In recent years, prayer breaks, footbaths and Muslim holidays have been observed in public schools; while Jesus and Christmas have been turned into NO JESUS and X-mas, then NO JESUS and NO X-mas – period! Yet, at the same time, they have gone so far as to teach the Five Pillars of Islam to your children, while Jesus Christ and the Ten Commandments are NOT ALLOWED!

Do you have any idea what the LLLs are doing to your children in public schools? They are incrementally turning them into homosexual, transgender, no gender – godless reprobates, except Muhammad and Allah okay!

Please visit the Home Education page for more information and consider getting your children out of the hands of ungodly lunatics before they end up Muslims, homosexuals, transgenders, or confused as to what gender they are altogether!

Barack Insane Obama, stealthy jihadi, is no longer in office, but his cronies are still all over the place, and some were put in office by LLLs before he even took office.

In the event you don’t get it yet, America has been under siege for a long time, but God has the last say. That’s exactly why President Donald Trump is in the Oval Office, allowing this nation a last opportunity to repent!

The Word of God tells us concerning the antichrist,

“Neither shall he regard the God of his fathers, nor the desire of women, nor regard any god: for he shall magnify himself above all” Daniel 11:37

“If My people, which are called by My name, shall humble themselves and pray and seek My face, and turn from their wicked ways, then I will hear from heaven and will forgive their sin and will heal their land” 2 Chronicles 7:14

This was a promise to Israel, after they sinned, and the same promise is extended to all nations today. If they refuse, God is God and…

“The wicked shall be turned into hell and all nations that forget God” Psalms 9:17 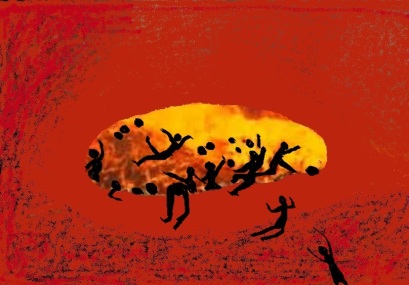 During the persecutions of Protestants by the Roman Catholics in Britain and Ireland, Robert Silks, who had been condemned in the bishop’s court as a heretic, made his escape out of prison, but was taken two years later and brought back to Coventry, where he was burned alive at the stake – all in the name of God (the god of Catholics, who is Lucifer)!

A few hundred years ago, Fox’s Book of Martyrs was chained to every pulpit, alongside the Holy Bible. I suppose people decided to turn their heads away from such violent crimes and become more “dignified.” We dishonor those who suffered by burying their testimonies and martyrdom. It also seems most churches today are too “dignified” for the Holy Spirit and fire, Who fell on the apostles of the early church (Acts 2)!