Church leaders in Nigeria have reported that Fulani herdsmen radicals (actually terrorists) have killed over 6,000 Christians, mostly women, children and aged, in night raids in Nigeria since January.

The Christians suffering genocide in Nigeria are pleading with the press, the United Nations and the international community to stop the genocide.

The Nigerian President Muhammadu Buhari will not bring the Muslim terrorists to justice. In 2001, Buhari said,

“I will continue to show openly, and inside me, the total commitment to the Sharia movement that is sweeping all over Nigeria. God willing, we will not stop the agitation for the total implementation of the Sharia in the country.”

This maniacal Islamic terrorist isn’t doing anything to stop the slaughter of pitiful women, children and the elderly, because he is for the slaughter.

International news media has sought to characterize the killings as a land conflict between community groups, reported the ChristianPost.com.

Christian leaders in Nigeria, and persecution watchdog groups, such as Open Doors USA, have reported that the Christians are deliberately being slaughtered.

The Fula, or Fulani herdsmen, responsible for the cowardly night raids and slaughter of women, children and aged, are Muslim terrorists, which isn’t mentioned in the press.

People need to stop beating around the bush and start calling a Muslim terrorist a stinking Muslim terrorist! References in the media to “radical Fulani herdsmen” and “Fulani radicals” are all coverups, folks.

Do we all have that straightened out now? THANK YOU!

Since the persecutions of the early church, centered in Israel and Rome, historical records show Christian genocides were committed by the Neo-Persian Empire, the Byzantine Empire, the Ottoman Empire, the Soviet Union, in Saudi Arabia, in Sudan and throughout many African nations that are predominantly Muslim, in France during the French Revolution; Stalin sought to eradicate Christians; China and Japan martyred Christians; Vietnam persecutes and kills Christians; Christians have suffered persecution in Indonesia; Christians suffer persecution and martyrdom in India. Can we ever forget the Roman Catholic Inquisition, which spread throughout Germany, Ireland, Scotland, England, the Netherlands and other parts of the world? Christians were not just killed by the Catholics, but slowly tortured, very much like the methods used by the Islamic State, some methods were worse!

Just one of the reasons there is a hell!

“Nation shall rise against nation, kingdom against kingdom (The original Greek translation literally means “ethnic race will attack ethnic race, and religions will fight against other religions” [“ethnos eppa ethnos” and “basileia eppa basileia“], and there will be famines, pestilences and earthquakes in diverse places” Matthew 24:7.

“All these are the beginning of sorrows” Matthew 24:8.

“Then they shall deliver you up to be afflicted, and shall kill you, and you shall be hated of all nations for My name’s sake” Matthew 24:9.

Salvation is offered to everyone who repents of sin and receives Jesus as their Lord and Savior; unless a person crosses a line with God, to the point of becoming reprobate (Romans 1:21-32).

During the persecutions of Protestants by the Roman Catholics in Germany, in Pomerania, some of the imperial troops entered a small town and seized upon all the young women and girls of 10 years and upwards. Placing their parents in a circle, they ordered them to sing Psalms, while they raped their children, or else they swore they would cut them to pieces afterward. They took all the married women who had young children and threatened them, that if they did not consent to the gratification of their lusts, they would burn their children in a large fire they had kindled for that purpose – all in the name of God (the god of Catholics, who is Lucifer)!

A few hundred years ago, Fox’s Book of Martyrs was chained to every pulpit, alongside the Holy Bible. I suppose people decided to turn their heads away from such violent crimes and become more “dignified.” We dishonor those who suffered by burying their testimonies and martyrdom. It also seems most churches today are too “dignified” for the Holy Spirit and fire, Who fell on the apostles of the early church (Acts 2)! 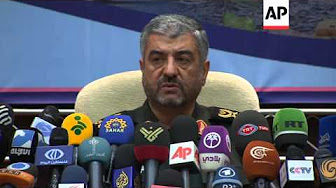 IRAN GENERAL: ISRAEL WILL NOT EXIST IN 25 YEARS!

Who now does not exist?

“We will destroy the Zionist entity at lightning speed and, thus, shorten the 25 years it still has left.”

Mousavi went on to say,

“I warn the Zionist entity not to make any stupid move against the Islamic Republic of Iran. Every such stupid act will make us turn Tel Aviv and Haifa into dust.”

Iranians have said for decades they will annihilate Israel and they issue these types of threats publicly, repeatedly.

Iranians forever fail to learn from the many bumbling and fatal failures of their forefathers. Throughout Biblical history, and even in recent history, time and time again, Israel has miraculously defeated their Middle Eastern enemies by the all-powerful hand of God Almighty in behalf of His chosen people, Israel.

Israel’s Biblical enemies were notoriously defeated, such as when the entire Egyptian army drowned in the Red Sea, as they were running after Israel. It isn’t necessary to go back that far in history to understand how God, even to this day, defends Israel.

Seyyed Mousavi, Ayatollah Ali Khamenei, all of Iran, take a look at the information below and WEEP!

The Word of God tells us concerning Israel in the last days,

“I will plant them upon their land and they shall no more be pulled up out of their land which I have given them, says the Lord your God” Amos 9:15 (emphasis added).

This is the promise of God to Israel and He does not lie – ever!

Since God does not lie, watch the Lord God blow their nuclear power to smithereens!

Here is a similar story found in Isaiah 37; I will summarize it for you:

Sennacherib, King of Assyria, told his man Rabshakeh to threaten the remnant of Jews in Judah with annihilation. Rabshakeh went and stood outside the wall of Judah yelling blasphemies against God and Israel, and he told them to tell Hezekiah, King of Judah, not to trust in their God to deliver them, because he had slain the surrounding kingdoms, and he would destroy them also. When King Hezekiah heard this, he went to the house of God to plead with the Lord, and he sent messengers to the Prophet Isaiah. Isaiah sent back word to Hezekiah:

“And Isaiah said to them, Thus shall you say to your master, Thus says the Lord, Be not afraid of the words you have heard, whereby the servants of the King of Assyria have blasphemed Me. Behold, I will send a blast upon him and he shall hear a rumor and return to his own land and I will cause him to fall by the sword in his own land” Isaiah 37:6-7 (emphasis added).

After this, God sent His angel to slay 185,000, the entire Assyrian army that came up with Rabshakeh against the small remnant of Jews remaining in Judah. Not only were they slain, but Sennacherib left and went to Nineveh. While he was worshiping his idol god, two of his own sons slew him with a sword!

The same blast will hit Iran’s nuclear power and many will be slain, unless they repent and turn to the real God. Watch it happen!

Another Muslim terrorist gunned down children, while screaming “Allahu Akbar!” at a McDonald’s inside a mall in Munich on Friday.

The Guardian reported that the killings were not related to Islamic terror, but witnesses reported the terrorist, Ali Sonboly, was heard shouting, “Allahu Akbar,” reported WND.

END_OF_DOCUMENT_TOKEN_TO_BE_REPLACED

IRAN LAUNCHES TWO MISSILES MARKED “ISRAEL MUST BE WIPED OUT”

Iranian news media reported they test-launched two missiles boldly marked with the words (in Hebrew), “Israel must be wiped out.”