The Pizzagate protest held in Washington, DC, on March 25th was very positive and some people drove from Michigan and Florida to attend, demanding an investigation into the DC pedophile ring.

The protest was very peaceful and there were no incidents of violence, unlike what we experienced when many Democrats rioted as President Donald Trump took office.

There is a huge difference between Christian/conservative protests and the violent protests made by Democrat-Liberal-Progressive-Socialist-Marxist-Leninist-Communist rioters, as they literally chased down Christians/conservatives, beat them, spit on them and vandalized their vehicles and other property.

Our protests convey the issues peacefully, but the liberals never cease to demonstrate how evil they really are, indicative of the god they serve – satan!

The same kind of liberals that can chase people down, beat them, spit on them and destroy their property, etc, are apparently the same kind of people that have fixations with little children and manufacture coffins for them!

Instagrams from James Alefontis, owner of Comet Ping Pong pizza, include many weird comments from Alefontis and others corresponding with him. There are extremely sadistic photos, which include one tagged as a “killroom” with “murder” described, with what appear to be blood stains all over and air conditioners along the wall, which is extremely bizarre, unless they are actually involved in moving children around and killing them, which is outrageous and horrifying! Either way, something serious is going on here and needs to at least be investigated! 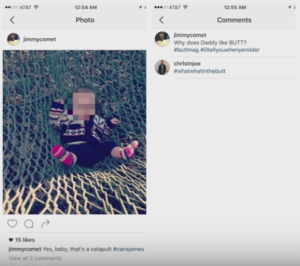 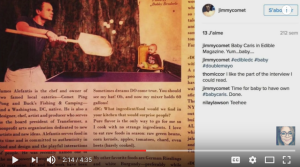 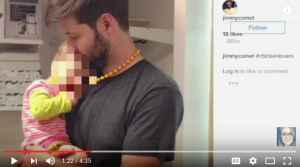 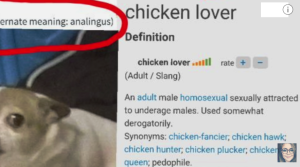 “Girl” and “pizza” noted. It seems Alefontis’s former boyfriend, David Brock, has suffered a heart attack. Do you suppose he is worried about something? 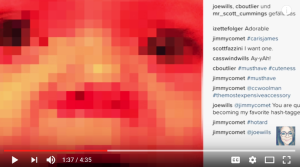 James Alefontis’s comment: “hotard,” which implies whore-retard. How appropriate is that despicable comment for a little baby girl? 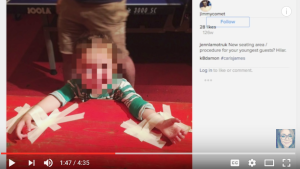 Oh, well I wonder what this implies? 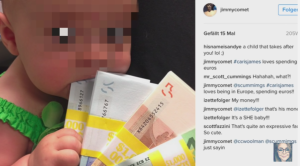 We see that again: baby with money! 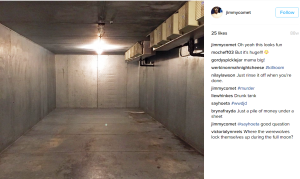 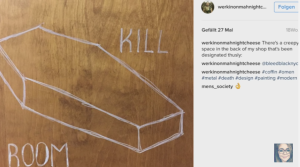 Is there a story developing here? 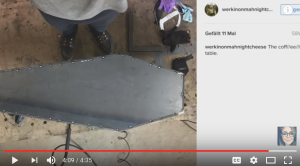 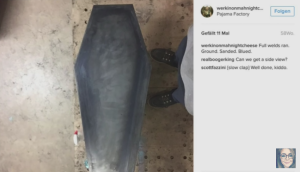 I think the messages are VERY CLEAR, unless one is totally BLIND!
Screen shots: YouTube.com

John and Tony Podesta both have strong ties to James Alefontis. They are powerful lobbyists and John Podesta was Bill Clinton’s Chief of Staff, as well as Hillary’s campaign manager. To compound the horror, we have a link to a video, which sounds exactly like John Podesta beating a child and screaming, “…I’m your father now!” as the child screams terrifyingly in the background. The video includes a voice analysis, which also reveals it is John Podesta’s voice, assuming the information is legitimate. With all of the other corroborating evidence, there is no reason to believe it is not legitimate. It is certainly and absolutely worthy of INVESTIGATION, considering children are allegedly being tortured and possibly even murdered (viewer discretion is strongly advised): https://www.youtube.com/watch?v=7b273RhFHCY 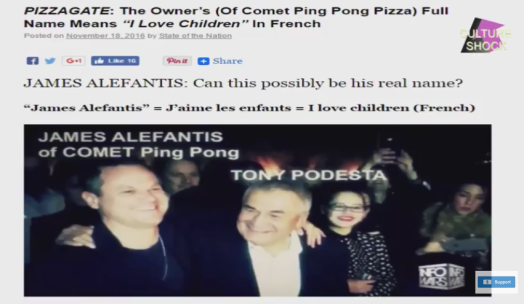 If all of this sounds absurd, no one should forget that former Speaker of the House John Dennis Hastert was recently convicted of molesting children and received a pathetic sentence, which should bring the judge into question!

To top it all off, Supreme Court “Justice” Ruth Bader Ginsburg reportedly has written a paper stating she believes the age of sexual consent should be 12 years of age! This woman is not only a propedophile liberal, she needs to be hastened off the bench, like picked up bodily and carried off ASAP! What a national disgrace! 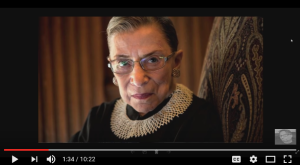 In my very strong opinion, it appears as though mainstream media has something to hide. Why do you suppose they are covering up for those involved in Pizzagate? I think there could only be one reason they are trying to hide this news.

One thing is certain, if we don’t see justice with our own eyes, Judgment Day is soon coming!

“Likewise, also as it was in the days of Lot…but the same day that Lot went out of Sodom, it rained fire and brimstone from heaven and destroyed them all” Luke 17:28-29.

“I saw a great white throne and He that sat on it, from whose face the earth and heaven fled away and there was found no place for them. And I saw the dead, small and great, stand before God and the books were opened, and another book was opened, which is the Book of Life; and the dead were judged out of those things which were written in the books, according to their works. And the sea gave up the dead which were in it, and death and hell delivered up the dead which were in them, and they were judged every man according to their works. And death and hell were cast into the lake of fire. This is the second death, and whosoever was not found written in the Book of Life was cast into the lake of fire” Revelation 20:11-15.

If you have a source of disseminating information, please spread these Pizzagate reports – for the sake of the children!